Jorgen is an artist and geographer currently based between Alice Springs and Jakarta, Indonesia. Jorgen’s work with Hannah deals with the politics and poetics of land use, involving extended periods of research into complex social, environmental, and political contexts. He tries to depart from documentation by asking how these contexts are envisioned, and how they could be made otherwise. His artistic and geographical research is underpinned by a habit of reading a lot and trying to read as broadly as possible. His 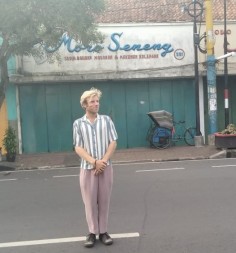 introduction to Indonesia and the Indonesian language has been greatly influenced by the country’s postcolonial literature, the writers who have plotted the country’s recent history and the grit of its major cities and political centres.

Jorgen and Hannah are collaborating on the translation Pagi yang Miring ke Kanan by Afrizal Malna.