I have been doing my ‘activity sheet’, or, ‘activity log’ for about two-three weeks now. I log what I read, listen to, write. I also include brief notes on the administrative tasks I have done. Even if this is the most boring part of the table, it is also perhaps the most important. I have recently added a new column for Cahaya: writing down whatever she has done; whether a highlight of the day or what she is doing at the time of me filling in the list. This kind of log-book is a kind of opposite from my usual way of doing things: which was just merely setting a list of tasks that I would have to complete per day or week. Having the table set out in this manner means that I have to find activities (tasks or jobs) to do so that I can fill in the boxes. I am writing this essay at 11:30-11:44pm as I didn’t want this day to pass without having done any writing. This piece will become a blog piece for Reading Sideways Press.

At the end of 2017, I took up a subscription with Spotify. I had quit Facebook and Twitter and doing so freed up some time. Social media chews up attention. A media of distraction. I do not feel in the slightest bit compromised by having left both: albeit I still need to properly and fully delete my FB account. Spotify seemed to be worth its fee: I got a special deal of $3 for my first three months, to then be followed with the usual of $12 per month. The price of $12 is less than the price of a new release CD and the equivalent of a second-hand CD. $12 per month would give me access to an endless stream of add-free, easily searchable library of pop, jazz and classical music. My emphasis is on pop and jazz. Using it for the first month was entirely intoxicating as I could go over old favourites and listen to albums by favourite musicians or groups that I hadn’t heard before. My knowledge of Brian Eno’s music hadn’t really progressed beyond his album with Jah Wobble, Spinner. Something about paying for Spotify was (and remains) comforting: my meagre contribution is actually going somewhere. Moreover, the lack of cost for facilities such as Facebook and or Twitter seems such a clear indication that the user is well, being used.

Here is some criticism of Spotify via John Harris at The Guardian. “My Problem with Spotify“.

Probably I am like most people: I think I have really good taste in music. How do I know? Well, the music I listen to, pleases me. Hahahaha. I have had many music heroes: Kids in the Kitchen, Thompson Twins, Robert Parr, Elton John, Public Enemy, Rolling Stones, Talking Heads, Lou Reed, Brian Eno, Laurie Anderson. Those were the bands and artists I listened to as a child and teenager. One of the first albums I listened to was Neil Diamond’s Jazz Singer, which my mother had in her record collection. Another early one was Tiny Turner’s Private Dancer on cassette. I believe one of the members of the Thompson Twins was a woman, as is Tina Weymouth of Talking Heads, but, otherwise my taste was pretty much an all-male domain. Without going into details, the ledger has somewhat evened up over the last ten years. Favourites include Shawn Colvin, Emmylou Harris, Yelle, Les Rita Mitsouko, Pretenders, Tori Amos, Divinyls. Although I like to think I have a certain ‘taste’; i.e. a refined understanding of what is my ‘style’ or favoured set of aesthetics, the music I actually listen to is probably more random than I realise. And thus, my keeping of a diary.

The Economist’s lifestyle magazine, 1843, had a small review of Meshell Ndgeocello’s new album: Ventriloquism. I was surprised by the lack of context with which they read Ndgeocello’s music career: there was nothing about her album Plantation Lullabies which is regarded highly by people such as Brian Eno. The reviewer’s reading of the album was that it was little more than a ‘serious interpretation’ of pop music. Since listening to it over the past ten days (but certainly not every day) I feel the reviewer left a lot out: such as the re-composition of the songs, the rather idiosyncratic choice of songs by Ndgeocello, her consistently brilliant bass playing and the production’s attention to percussive detail. These are very refined, detailed recordings of pop, soul and funk hits. Meshell’s version of Private Dancer is sombre, emotive, understated and grand all at the same time. That is her quality as a musician: it makes the listener unsure of how to respond.

I gain my deepest enjoyment of music through listening to artists and bands I have had an ongoing ‘relationship’ with. I have listened to Talking Heads for more than 30 years. But to listen to them everyday is too boring. I can hear their songs in my head without having to use Spotify or put on a CD. (Moreover, I’m not interested in David Byrne’s new album -which he himself as apologised for, due to its absence of women collaborators.) I am seeking to find a balance between listening to new and different albums by my favourite artists (for example whatever by Ibrahim Maalouf or Meshell Ndgeocello or The Bad Plus), recommendations from friends (such as Editors via Tim S) and yes, recommendations from Spotify itself. Meshell’s Ventriloquism grew significantly on my over the period of 3-4 weeks. Probably this is the minimum amount of time I need to give an album. 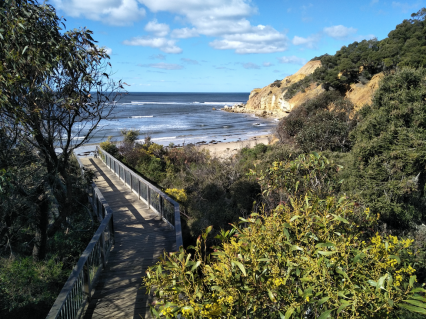